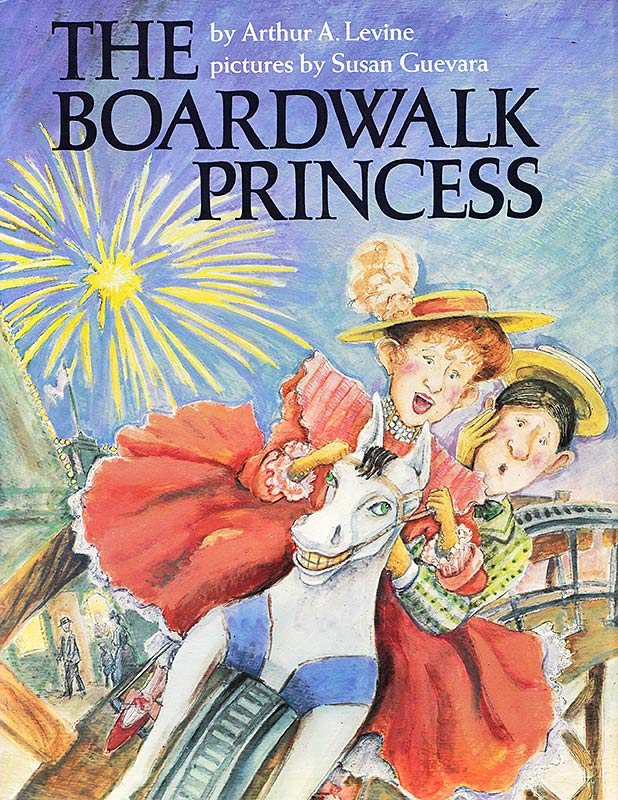 “The Grimm fairy tale ‘Brother and Sister’ is transported to turn-of-the-century New York City in this richly comic story whose opening sets the tone–“Once upon a time, in a strange land called Brooklyn…”  In charmingly sly prose, Levine tells of the siblings Myron and Sadie, gifted dressmakers enslaved to an evil witch-cum-sweatshop-owner.  When they attempt to escape, the vindictive hag changes Myron into a mouse–a garment-district Stuart Little with a nose for fabric bargains–but steadfast Sadie keeps him in her pocket as they flee to live in a hand-sewn tent on the Coney Island boardwalk. Levine’s finely crafted text is peppered with flippant, tongue-in-cheek humor.  “She was last year’s news now.”  Levine says of the witch before dispatching her in the tale’s happy ending.  A delight, too, is the proto-Donald Trump real-estate tycoon (named simply “the Tycoon”), who rescues the comely Sadie and her brother. The story is ideally complemented by Guevara’s riotous pencil, acrylic and gouache illustrations. The artist’s vivid palette recalls 19th-centruy poster art, and her eye for detail is masterful–laundry zigzags across tenement alleys; the witch watches her spell unfold from the corner of a frame; buttons pop on Myron’s mouse outfit when he is restored to his normal shape.”–Publisher’s Weekly

“…Guevara’s expressive mixed-media art swirls with energy; she amplifies the humor while exploring the period scene in delightful detail.  Good fun all the way.”–Kirkus